The aim of this project is to design a new innovative information system for the future of the classroom, by making easier and especially automating daily tasks. Although there are already four projects linked to the smart classroom and realized by ENSIMAG students, our module have to fit in well with the others in order to obtain a real innovative infrastructure. 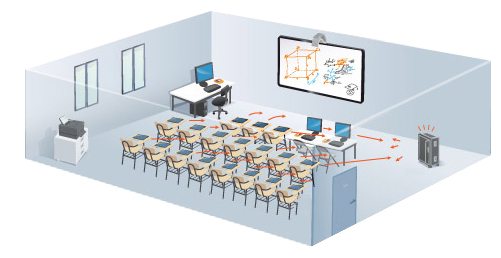 Our project follows those realized by students of ENSIMAG : Smart Classroom
Following this link you can find how the infrastructure of the project has been implemented by them.

Our product has to meet the following need :
Students come in class, announce their presence and get settled at their work station. The teacher does the same and accesses his plateform where he can get courses and exams that he has created before. Then, the teacher can submit multiple-choice questionnaire to students. They answer to it individually before submitting their answer to the teacher. After that, he can refer to the results and publish it by theme. The teacher can start again a lesson if he sees that it hasn't been clear enough for his students. Finally, he can reorganize students by working group.

SmartClassroom project is based on a couple of storylines realized by different groups, and we are only working on one of these. Future upgrades of this environment could be put forward and implemented by other groups in charge of developing this project.

Identification and communication between the students and the teacher

The project has begun in January the 13th.

End of sprint 1 which consisted in :

How to connect to your Moodle local server from the Moodle Mobile app ? (on linux)

How to install a LDAP local server ? (on linux)

How to make tests on your Moodle server ? (on linux)