The document provides a template of the Software Requirements Specification (SRS). It is inspired of the IEEE/ANSI 830-1998 Standard.

1.1 Purpose of the requirements document

The main goals of this document which describes the robotic arm project are :

1.2 Scope of the product

The long-term goal of this project is to develop a control software manipulator arm for support of persons with disabilities. There are commercial products of arms which are unfortunately too expensive and does not have control system high levels. An example is the robotic arm Jaco.

It is a library for augmented reality applications based on OpenCV

The library relies on the use of coded markers. Each marker has an unique code indicated by the black and white colors in it. The libary detect borders, and analyzes into the rectangular regions which of them are likely to be markers. Then, a decoding is performed and if the code is valid, it is considered that the rectangle is a marker.

SPADE (Smart Python multi-Agent Devepment Environment) is multiagent and organizations platform based on the XMPP technology and written in the Python programming language. The SPADE Agent Library is a module for the Python programming language for building SPADE agents.XMPP is the Extensible Messaging and Presence Protocol, used for instant messaging, presence, multi-party chat, voice and video calls, etc.

This project is a school project, located in Polytech Grenoble, and supported by AIR The project page on air wiki is available through this link [1]

1.5 Overview of the remainder of the document

The long-term goal of this project is to develop control software manipulator arm for supporting people with disabilities. There are commercial products of robotic arms which are unfortunately too expensive and does not have high level control system. Therefore, the aim is to develop a robotic arm which will be able to perform series of movements using markers. The part described in this document will focus on the detection of markers.

We have to consider the possible evolution of this project.

Initially, From a webcam placed on the robotic arm, it should be possible to, in real time:

Secondly, send the obtained data to the robot to enable it to move to this object. This requires several steps:

The simulator have to use this information to make the robot move in the right direction.

This project is intended to disabled people. The robotic arm will allow them to grab distant objects. The arm can be remote-controlled. Therefore, users can be developers who can create new sequences of instructions given to the robot.

The system is based on ARUCO which enables programm to get back the position of the marker and SPADE which make the data transmission through an XML file possible.

This diagram below describes how our project works. 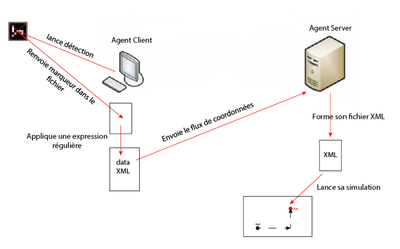 First, the Client Agent launches the detection with ArUco and gets a marker vector. It applies then a regular expression that allows him to extract the coordinates of marker vector and transform them into XML tags that are successively transmitted to the Agent Server that receives them in order to form the file that will allow him to begin its simulation.

Description: The camera detects the marker on the object and locates it

Outputs: Video stream with markers highlighted with their id and an file which contains one of the found marker vector (its id and the coordinates of the four points which is made up of)

Destination: All people, all object which can be taken by the robot

Action: The ArUco library detects borders and analyzes in rectangular regions which may be markers. When a marker is found, its vector is write into a file.

Non functional requirements: The marker detection should be done in real time and faster

Pre-condition: Have a camera and ArUco library installed

Post-condition: The marker has to be well recognized.

Side-effects: Failure of the marker recognition

Description: Coordinates are extracted in the marker vector and transferred as XML Tags

Action: The Agent Client applies a regular expression to extract coordinates into the file and send it to the Server

Non functional requirements: The messages have to be delivered quickly and arrive in order. A message must not be lost.

Pre-condition: Download, configure and launch SPADE platform connexion (in localhost or in a specific IP adress)

Post-condition: All messages have reached their destination in order

Side-effects: Acknowledgments are sent by the server

Description: The XML file is parsed and then the marker position is calculted and displayed on a graphic interface

Destination: To the robot and people who used it (as the other group)

Action: The Server Agent interprets XML tags and gets back the coordinates of the corresponding point and display it. The point depicting the robot is also displayed and can be moved with the keyboard

Non functional requirements: The version of the XML file must be 1.0.

Pre-condition: The XML file is readable and contains no error

Post-condition: The point is displayed on the screen with the exact coordinates given in parameter

Side-effects: A pop-up window is generated when the robot reachs the marker's position