1.1 Purpose of the requirements document

The intended audiences of this document is the users, the developers and the tutor of the project.

1.2 Scope of the product

1.5 Overview of the remainder of the document

The second chapter describes the general factors that affect the project and its requirements. This section does not state specific requirements, instead, it is used to establish a context for the those requirements specification in the next chapter.

The third chapter, Requirements Specification section, of this document is written primarily for the developers and describes the details of the functionality of the product. 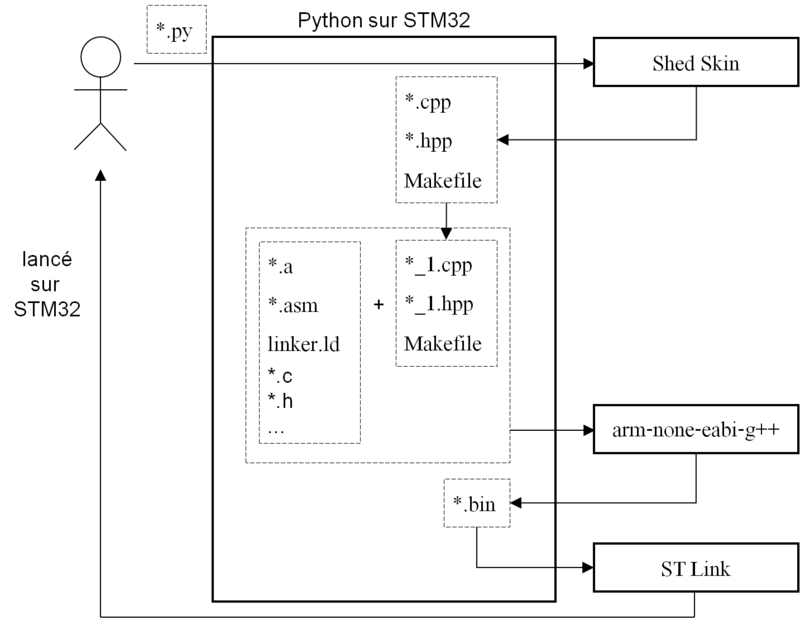 1. With the help of the project Shed Skin, firstly we compile the users’ input python source code(.py) to C++ code(.cpp, .hpp, Makefile).

2. The core part of this project is to modify the Makefile, to add necessary initialisation to the C++ code generated by Shed Skin and to add other needed files (linder.ld, etc) and libraries to make it compilable by the compiler arm-none-eabi-g++.

3. With the help of the GNU/ARM toolchain (command arm-none-eabi-g++), compile the program and obtain the executable file *.bin.

4. To use the tool ST-LINK which is an in-circuit debugger and programmer for the STM8 and STM32 microcontroller families to write the executable file .bin to the board.

The command line style will be used as the user interface of this programme. And the specific error messages will be returned to the user when error occurs.

The programme should be run on Linux System. The STM32F407 is used as the targed board.

The main purpose of the project is to generate the executable file of the board STM32F407 from the C++ code which is generated by the program Shed Skin. To achieve this goal, the project should embody the following features and functions:

The project is intended for the users who want to run their python programs on the board STM32. The users need to know the exact errors when it is caused by the python code they wrote. The users may or may not know exactly how to download and run the program on the board, but they are expected to know the basic steps and to do the operations as suggested in the document of this project.

The program required the following software products to be pre-installed:

The project assume that the users’ input python code observe these limitations listed [1]:

The project's only external interface to users is the command pythonSTM32 following with the options and the input file. The output of the program is the execution of the program on the board STM32 which is connected to the user’s computer, this program is right compiled from the users’ input python code.

Function: implement the STL, Lib C and libprce in the targeted C++ code

Description: The initial C++ code generated by Shed Skin contains STL, Lib C and libprce functions which are not supported by the compiler arm-none-eabi-g++.

Destination: To generate the executable file for the board STM32 from these C++ codes.

Pre-condition: The C++ code generated by Shed Skin is correct.

Post-condition: The output C++ code doesn’t change the intension of the initial code and could be compiled by the compiler arm-none-eabi-g++.

Function: add the GC feature in the targeted C++ code.

Description: The GC is supported in the Python but it is not implemented in the initial C++ code.

Inputs: The C++ codes compilable for the compiler arm-none-eabi-g++

Outputs: The C++ codes that have implemented the GC.

Destination: To generate the executable file which implement GC for these C++ codes.

Pre-condition: The C++ code generated by Shed Skin are right.

Post-condition: The output C++ codes don’t change the intension of the initial code and could be compiled by the compiler arm-none-eabi-g++.