An intelligent personal assistant is a software agent that can perform tasks or services for an individual. These tasks or services are based on user input, location awareness, and the ability to access information from a variety of online sources (such as weather or traffic conditions, news, stock prices, user schedules, retail prices, etc.). Examples of such an agent are Apple's Siri, Google's Google Now, Amazon Echo, Microsoft's Cortana, Braina (application developed by Brainasoft for Microsoft Windows), Samsung's S Voice, LG's Voice Mate, BlackBerry's Assistant, SILVIA, HTC's Hidi, IBM's Watson_(computer), and Facebook's M.

Examples of tasks that may be performed by a smart personal agent-type of Intelligent Automated Assistant include schedule management (e.g., sending an alert to a dinner date that a user is running late due to traffic conditions, update schedules for both parties, and change the restaurant reservation time) and personal health management (e.g., monitoring caloric intake, heart rate and exercise regimen, then making recommendations for healthy choices). Intelligent personal assistant technology are enabled by the combination of mobile devices, application programming interfaces (APIs), and the proliferation of mobile apps. However, intelligent automated assistants are designed to perform specific, one-time tasks specified by user voice instructions, while smart personal agents perform ongoing tasks (e.g., schedule management) autonomously.

Siri is a part of Apple Inc.'s iOS, watchOS and tvOS which works as an intelligent personal assistant and knowledge navigator. The feature uses a natural language user interface to answer questions, make recommendations, and perform actions by delegating requests to a set of Web services. The software, both in its original version and as an iOS feature, adapts to the user's individual language usage and individual searches (preferences) with continuing use, and returns results that are individualized. Siri was originally introduced as an iOS application available in the App Store by Siri, Inc., which was acquired by Apple on April 28, 2010. Siri, Inc. had announced that their software would be available for BlackBerry and for phones running Android, but all development efforts for non-Apple platforms were cancelled after the acquisition by Apple. 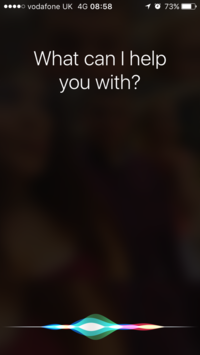 Cortana is an intelligent personal assistant created by Microsoft for Windows Phone 8.1 and Windows 10 (where it now supersedes Bing Mobile), Microsoft Band, Windows 10, and coming to iOS, Android and the Xbox One. Cortana was demonstrated for the first time at the Microsoft BUILD Developer Conference (April 2–4, 2014) in San Francisco. It has been launched as a key ingredient of Microsoft's planned "makeover" of the future operating systems for Windows Phone and Windows. It is named after Cortana, a synthetic intelligence character in Microsoft's Halo video game franchise originating in Bungie folklore, with Jen Taylor, the character's voice actress, returning to voice the personal assistant's US-specific version. 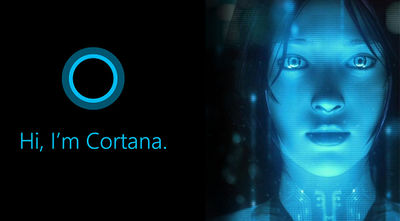 Google Now is an intelligent personal assistant developed by Google. Google Now is available within the Google Search mobile application for Android and iOS, as well as the Google Chrome web browser on personal computers. Google Now uses a natural language user interface to answer questions, make recommendations, and perform actions by delegating requests to a set of web services. Along with answering user-initiated queries, Google Now proactively delivers to users information that it predicts (based on their search habits) they may want. It was first included in Android 4.1 ("Jelly Bean"), which launched on July 9, 2012, and was first supported on the Galaxy Nexus smartphone. The service was made available for iOS on April 29, 2013 without most of its features. Google Now was released for Google Chrome on March 24, 2014. Popular Science named Google Now the "Innovation of the Year" for 2012. 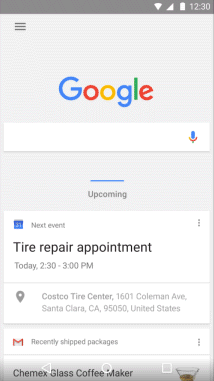 Sirius is an open-source end-to-end standalone intelligent personal assistant (IPA) service. Sirius receives queries in the form of speech or images and returns results in the form of natural language. Sirius implements the core functionalities of an IPA including speech recognition, image matching, natural language processing and a question-and-answer system.