This project aims at creating a light cloud computing architecture on top of the batch scheduler OAR. The main goal is to bring the best of the cloud computing in the Grid world.

You can access to the Git repository on github.

This project is proposed by:

Three students from RICM are working on it:

State of the art

This project begins on January 2013. Here is the current state of the art concerning the cloud computing technologies and the underlying virtualization technologies.

The cloud computing is the use computing and storing resources through a network. It is providing a stack of services, from the hardware to the applications, named "Something as a Service". You can read a more exhaustive definition on Wikipedia.

The layer we are interested in, is the Infrastructure as a Service layer (IaaS). It provided access to computation resources with an hardware abstraction made by virtualization. The leader in this domain is Amazon EC2. There IaaS proprietary platform is considered as the industrial standard and almost every other cloud computing solution are compatible with it's API. They provide, through a Command Line Interface (CLI) and a Web interface, a simple way to deploy scaling web applications and services. This is an on-demand self-service and you pay only when you are using it. The main features of Amazon EC2 are (from the Amazon EC2 web site):

But there is lots of alternatives to Amazon. Several company provide the same kind of services using proprietary or open source solutions. You can see a comparison of some of these solutions here.

Xen
Well known and used in big mainframe cloud solution, Xen is consider as reliable. It is a bare-metal (type1) hypervisor that pivot directly on hardware. This means that every operating systems that runs on top of this hypervisor needs to be ported to fit with the paravirtualization API. It recently provide an hardware-assisted virtualization like KVM.

KVM
Included to the Linux Kernel, KVM (Kernel-based Virtual Machine) is using hardware-assisted virtualization for x86 processors with the virtualization extensions (Intel VT or AMD-V). It seems to be quite equivalent to Xen, but some say that it's quite easier to use.

LXC
The most recent one, LXC for LinuX Container use an other kind of virtualization technique based on isolation. The major drawback is that it works only for Linux OS or program. Also, the actual stable version (0.7.5) is still a work-in-progress and the API is not stabilize yet. There is lots of security issues not really solve for now[1] [2]. The major advantage is speed and the fact that LXC is directly accessible into the kernel.

We want to know if LXC can be a good alternative to Xen or KVM.

In cloud computing infrastructure we need to connect the Virtual Machines (VMs). To achieve this, the network virtualization is used. In the Linux world the most common virtual network used the virtual interface named bridge. The bridge is forwarding packet at Layer 2, so it is independent of upper layer protocols. It can be manage via the brctl command. Advanced features, like filtering or firewalling, are done using the ebtable project.

A more complete tools named OpenVSwitch is open source and commonly used in lots of cloud computing solutions. It's basically a virtual switch that can handle VMs inside a node or between multiple node over real switch.

To fit our demand regarding the network we will try to use OpenVSwitch to build our solution.

Here is the big picture of what could be the entire solution. It aims at giving us an overview of the project and helping us to design a roadmap.

There is two kind of actors that are dealing with OAR cloud, users and administrators. The F.u* and the F.a* are the user and Administrator features describe below.

F.u.1 Launch and configure one or more instances

F.u.2 Deploy an image on one or more instances

F.u.3 Modify and save images

F.u.5 Being inform by e-mail and/or notification for interesting events

F.a.6 Being inform by e-mail and/or notification for interesting events

Here is the logical view of the OAR Cloud system. Every component on this diagram represents a software component type. The links between these components represent the communication between them.

This is the first version of what could be the entire system architecture. It is design to make all the above features works. 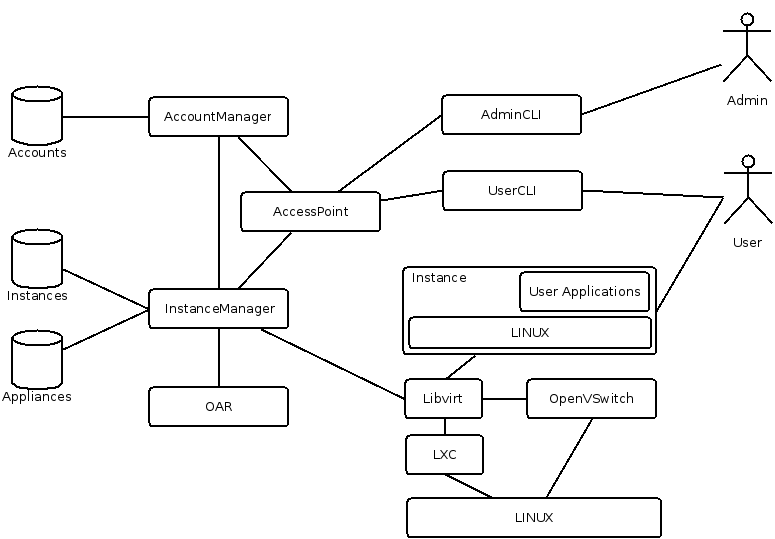 Description of the main components:

AccountManager
Handle users and admins access rights
AccessPoint
The system access point reached by the different access tools
InstanceManager
Manage the creation, configuration and deletion of instances all over the severals nodes. It also handles the appliances persistence and deployment
UserCLI & AdminCLI
Command line access tools for users and admins

Not relevant : skip it!

This logical view was made after the M1 milestone and based on the knowledge gained this step. It is a much more minimal approach. However, it only complete the F.u.0 to F.u.3 and F.a.0 to F.a.4 features. 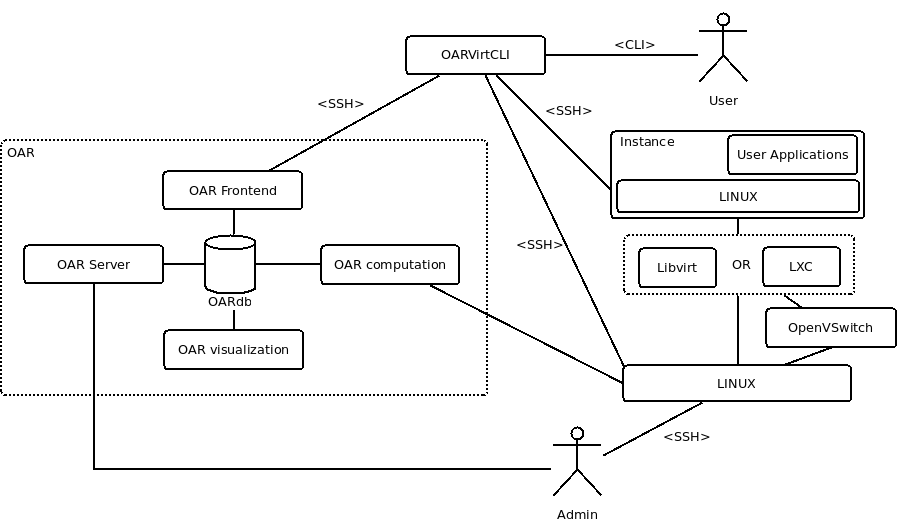 Description of the main component:

OARVirtCLI
It is a command line tool (CLI) that is install on the user's computer. It allows to : 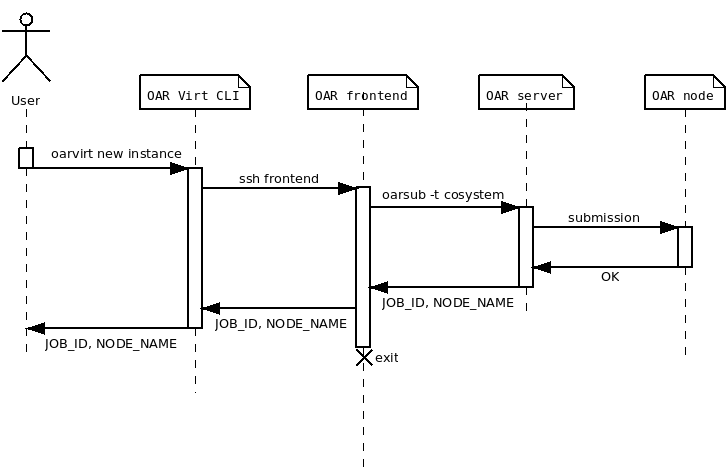 This table presents the milestones of the project. Each Milestones are described below.

In an Ubuntu 12.04 LTS environement

The cigri devel appliance was used as an configuration example for this. The Ubuntu 12.04 LTS distribution has been chosen because it seems to be one of the few distributions where LXC works out-of-the-box.

The problem comes from the cgroup-lite service that run by default in an Ubuntu 12.04. Stop this service using

solve the problem for OAR but puts LXC down.

I find a trick to make OAR and LXC working together: I disable the cpuset feature of OAR. In the /etc/oar/oar.conf (there is a copy in the M1 folder) I have comment CPUSET_PATH and set to yes OARSUB_FORCE_JOB_KEY as it is provided in the CPUSET_PATH comment.

Thus, I could run an LXC container inside a job. The container was vanished when the job has been killed.

During this milestone we learned several things:

We can notice that systemd-nspawn, a kind of container launcher based on systemd. It is currently just a hack tool but it might become an LXC alternative for systemd based distributions.

We found this page explaining how to use OpenVswitch (OVS) to connect two EC2 instance with a GRE tunnel. The script attached to this page was used to set up an OVS bridge to replace the default linux bridge. Two problems appeared:

The use of OVS as the main bridge for an LXC container is unstable. It seems that LXC and OpenVswitch are not really compatible for now.