The members of this team are Alexandre Corso and Laurène Guelorget.

Our project is a part of the RobAIR2013 project.

RobAIR is a project in which several schools and departments are involved, such as:

This project consists of developing an extensible and open-source robotic platform. The robot, called RobAIR, is a telepresence robot that can be used for museum tours while the user controls it thanks to an Android tablet.

We are responsible for the WiFi roaming:

WiFi roaming is a very important point concerning the project as we have to make sure that the robot stays connected at all time. RobAIR will be used in a museum where every room is likely to have its own WiFi Access Point. When the robot changes room, it has to stay connected, even as the change of Access Point is being made.

Roaming is a technology which allows a station to change his Access Point while remaining connected to the network. Roaming was not implemented in the WiFi standard, even though WiFi is a wireless technology. The reason is that WiFi exists since 1999 but at the time, wireless stations (such as laptops) were moved only when turned off. So contrarily to the GSM network, which included roaming from the start, roaming is not integrated to the WiFi technology. 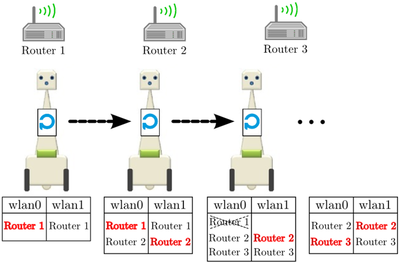 In this figure, we can see how roaming will work in our project. Our robot possesses two interfaces (wlan0 and wlan1) and at all time, it is connected to at least one Access Point. First, the robot is connected to the Router1 on wlan0. By moving, the robot receives signals from other Access Points. The Router2's signal is stronger so the robot connects its free interface (in this example, wlan1) to Router2. It can then disconnect itself from the Router1 Access Point. This process goes on as the robot moves around.

We decided to use the Multipath Transmission Control Protocol (shortened MPTCP) because it offers better throughput and a smoother reaction to failures. MPTCP adds the capability of simultaneously using multiple paths to a regular TCP session. The availability of multiple connection paths and the capability to dynamically schedule traffc between them allows more flexibility and efficiency in Internet congestion control. MPTCP is a standard in the pipeline at the Internet Engineering Task Force (IETF). The goal of this protocol is to use the same TCP connection hrough different network interfaces. One of the most typical use is to unload GSM networks via WiFi. It allows you to use WiFi on your Smartphone and as soon as you are not in range of WiFi, you swap to GSM 3G network. The main advantage of MPTCP is that the change of network is totally transparent for the applications. Even if the standard is in the pipeline, it is already possible to use MPTCP on a Linux distribution thanks to a modified version of the kernel. Hence, we had to recompile the kernel to be able to use MPTCP.

The functioning is similar to TCP. First, there is a handshake with the server, like with the classic TCP protocol. Only with MPTCP, the client sends a additional option that signals that it is capable to use MPTCP. The server has to respond with the same option for the communication to be enabled. The congestion management with MPTCP aims to have the throughput at least as good as the max throughput on the best interface. For that, a congestion window is kept for each path. After that, the congestion management is the same as in classic TCP.

To ensure that the robot stays connected at all time, we wrote a program in language C and we created several data structures to manage the WiFi networks. This program of WiFi roaming will be executed on the Ubuntu tablet that will be on the robot. 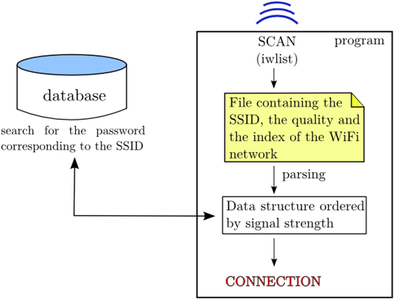 global functioning of our program


Progress of the project

- First we scan the network
- Then, we order the available list of networks by signal strenght
- Next, we compare the SSIDs to a database of past used networks
- Finally, we connect the robot to the network